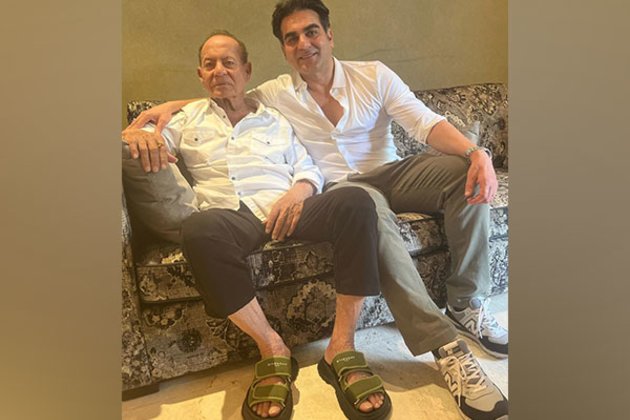 Taking to Instagram, Arbaaz shared the pictures which he captioned, "Happy birthday Daddy."https://www.instagram.com/p/ClVwR4iy-hS/In the family picture, Salim Khan could be seen sitting at a dining table with numerous delicacies on the table and his family members Salman Khan, Arbaaz, Sohail, Alvira Agnihotri, Salma Khan, Helen and Arpita Khan could be seen standing behind him.

The 'Tiger' actor could be seen donning a t-shirt and a cap and holding Arpita's daughter at the back.

In the second and third pictures, Arbaaz can be seen posing with the veteran writer on a couch.

Soon after Arbaaz shared the posts, fans and friends swamped the comment section with red hearts and birthday wishes for Salim Khan.

Another fan wrote, "Happiest birthday to the legend... wish him great health loooong n happy life with his infectious humor intact."Bollywood screenwriter Salim Khan has penned a string of cult classics in collaboration with Javed Akhtar.

Meanwhile, Arbaaz Khan was recently seen in the series 'Tanaav' alongside Manav Vij which streamed exclusively on Sony Liv.

Set against the idyllic backdrop of Kashmir in the year 2017, Tanaav was a fictional thriller revolving around a Special Unit, their bravery, and courage. Delving into the human drama behind the ideologies, dealing with complex emotions and flawed characters, all of whom share the same feelings of love, loss, betrayal and revenge, the show is a socio-political action drama with family at its core. (ANI)