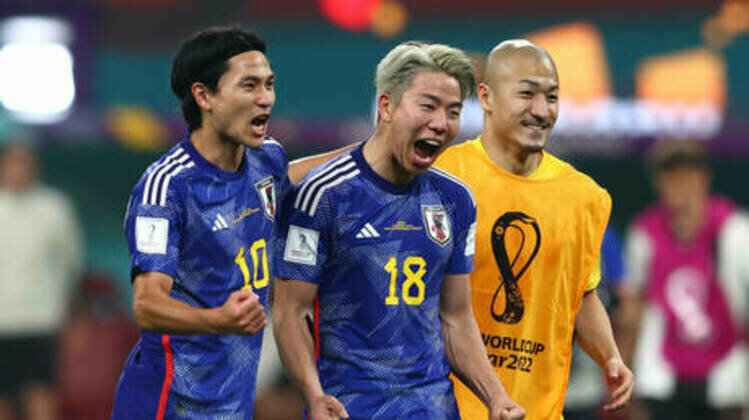 Just over 24 hours after Saudi Arabia stunned Lionel Messi and Argentina, the FIFA World Cup in Qatar has provided another seismic shock as outsiders Japan scored two late goals to clinch a sensational 2-1 win against Germany at the Khalifa International Stadium in Doha.

The Germans, who protested FIFA's decision to ban the wearing of anti-discrimination armbands ahead of kick-off, were in control for large spells of the game and appeared to be on course for three points in the Group E clash when Manchester City's Ilkay Gundogan coolly slotted home a penalty just after the half-hour mark.

They missed a host of chances to extend their lead, including forcing Japan's goalkeeper Shuichi Gonda into a fantastic double-save from Serge Gnabry and Jonas Hofmann, before substitute Ritsu Doan levelled the scoreline 15 minutes from time.

Eight minutes later, another replacement, Takuma Asano, poked home from a tight angle to give the 2002 World Cup hosts a shock lead.

For all their bluster, Germany was unable to break down a stubborn Japanese rearguard as the seconds ticked away, condemning Hansi Flick's team to an embarrassing reverse in their opening World Cup fixture.

The final whistle prompted wild celebrations from a delirious Japanese squad in what is one of the greatest results in the nation's history.

Germany, four-time winners of the World Cup including as recently as 2014 in Brazil, now faces an anxious wait to see if their next two performances will earn them passage to the knockout stage.

They will face 2010 champions Spain in what is now a crucial clash on Sunday, knowing that another defeat could all but condemn them to a second group stage exit in succession.

Germany was ousted at the opening stage of the 2018 World Cup in Russia when they finished bottom of their group, claiming just one win and two goals along the way.

Japan, meanwhile, will take on Costa Rica in Sunday's first kick-off with a win all but guaranteeing they will move to the Round of 16.