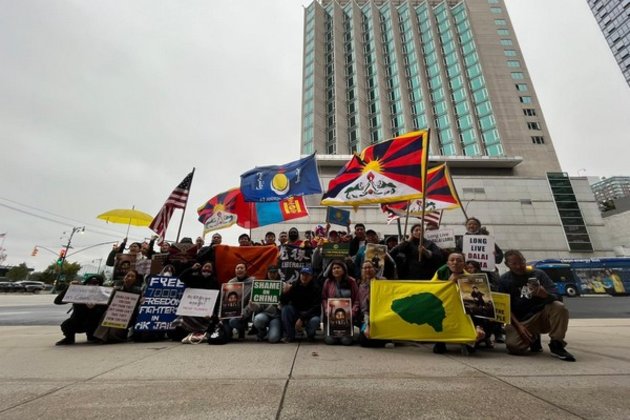 Washington [US], October 5 (ANI): China's minority communities - Tibetans and Uyghurs burned Peoples Republic of China flags at demonstrations in several US and UK cities on the occasion of its National Day on October 1.

Demonstrators in London burned the Chinese flag, and threw maggots and dung on it outside the Chinese embassy, in protest at Beijing's human rights record.

Hong Kongers, Tibetans and Uyghurs organized around 15 protests in UK cities to mark the 73rd National Day and "say no to the CCP, reported RFA.

A protester surnamed Tse said he was carrying the colonial-era Hong Kong flag at the protest, to express nostalgia for the city's lost freedoms.

"We want a Hong Kong with freedom, democracy and the rule of law like we had in the past," Tse told RFA. "Hong Kong people should have the final say in (how to run) the place, not the country next door.""They have trampled on the promises made to the people of Hong Kong, the commitments made in the (1984) Sino-British Joint Declaration and on its promise to the world," he said. "Did they once ask the people of Hong Kong (what they thought?)"Uyghur dissident Rahima Mahmut told the rally that, since the PRC was founded 73 years ago, Tibet and Xinjiang have been occupied, the Cultural Revolution brought political turmoil to China, and the CCP had bloodily suppressed dissent in the 1989 Tiananmen massacre, reported RFA.

Hong Kong's freedoms and democracy have been destroyed, and Uyghurs have suffered genocide, including the mass incarceration of Uyghurs in their homes for more than a month without food as part of CCP leader Xi Jinping's zero-COVID policy, she told the crowd.

from agents of the Chinese state while in exile overseas.

In the United States, protesters gathered on the campus of the University of California, Berkeley on October 1, waving the Tibetan flag, the colonial-era flag of Hong Kong and placing a tombstone effigy inscribed with the an estimated death toll under CCP rule since Mao Zedong proclaimed the People's Republic of China from Tiananmen podium on October 1, 1949, reported RFA.

Chanting "Free Tibet!", "Free Hong Kong!" and "Free the Uyghurs!", the protesters also hung a placard which read "I know what you did in the Czech Republic" on a tree outside the building.

Chen Guodong, a member of the Asian-American political group Far East Youth Freedom League, said protesters had also brought along a portrait of late Czech official Jaroslav Kubera, who died of a heart attack in office shortly after receiving a threatening message from the Chinese embassy in the Czech Republic, according to his relatives, reported RFA.

"Mr Kubera passed away (in 2020), when he was about to visit Taiwan," Chen said. "He was threatened by Zhang Jianmin and died shortly after (so we believe) Zhang Jianmin has blood on his hands."Tenzin Dorji, a member of the Northern California Tibetan Association, said he took part to protest the illegal occupation of Tibet by the CCP, reported RFA.

"The CCP has illegally occupied Tibet, and Tibetans are suffering a genocide under its brutal rule," he said.

Protest motorcades also turned out in San Gabriel, Los Angeles, and Park City, Montreal, with signs that read "Destroy the CCP!"The LA protest took a detour to take in the Chinese consulate in the city, where a group of protesters that included Tibetans and Uyghurs burned the Chinese flag. (ANI)