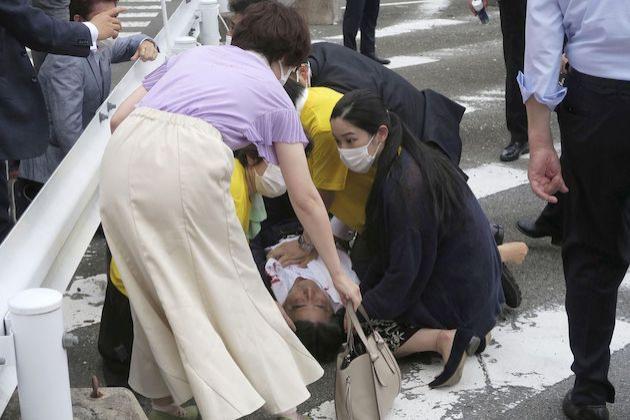 TOKYO, Japan - An assassination attempt has been made on Japan's former Prime Minister Shinzo Abe.

Abe was shot in the chest while giving a campaign speech in the city of Nara, in Japan's west on Friday morning.

The alleged attacker, a man identified as Tetsuya Yamagami, 41, has been seized by police.

Former Prime Minister Abe was unconscious and showing no vital signs as he was being rushed by ambulance to hospital, according to a Kyodo news agency report.

The attack occurred around 11.30 am Friday.

"Earlier today at roughly 11:30 AM, former Prime Minister ABE Shinzo has been shot with a gun in Nara Prefecture. A male, believed to be the person who shot Mr. Abe, has been taken into custody. Mr. Abe's condition is unknown at present. We will continue to work to confirm it," Chief Cabinet Secretary Hirokazu Matsuno told a press conference Friday afternoon.

"At 11:45 AM, the government established a liaison office within the Crisis Management Center of the Prime Minister's Office, whereupon a meeting of ministries and agencies concerned was convened, and they are currently working on responses to the matter."

"Prime Minister Kishida, who was making speeches as part of the election campaign, was informed immediately of the matter and will return urgently to the Prime Minister's Office from now. We have instructed all cabinet members out giving speeches in various locations to return to Tokyo immediately," Japan's cabinet secretary said.

"Outrageous acts of this kind are absolutely intolerable, no matter the reason, and I strongly condemn this act. The government will take all possible measures to respond to this situation."

Whilst former Prime Minister Abe was clinging to life, world leaders prayed for his recovery.

"Abe-san has been an outstanding leader of Japan and unwavering ally of the U.S. The U.S. Government and American people are praying for the well-being of Abe-san, his family, & people of Japan," U.S. Ambassador to Japan Rahm Emanuel tweeted.

India's Prime Minister Narendra Modi also joined leaders around the globe in paying tribute. "Deeply distressed by the attack on my dear friend Abe Shinzo," Modi said in a tweet. "Our thoughts and prayers are with him, his family, and the people of Japan."

U.S. Secretary of State Antony Blinken told reporters at a G20 meeting in Bali: "Our thoughts, our prayers are with him, with his family, with the people of Japan. This is a very, very sad moment. And we're awaiting news from Japan."

WASHINGTON D.C.: The U.S.Department of Justice is reportedly preparing to sue Google as soon as next month, claiming that the ...