How Should US Respond to a North Korean Nuclear Test 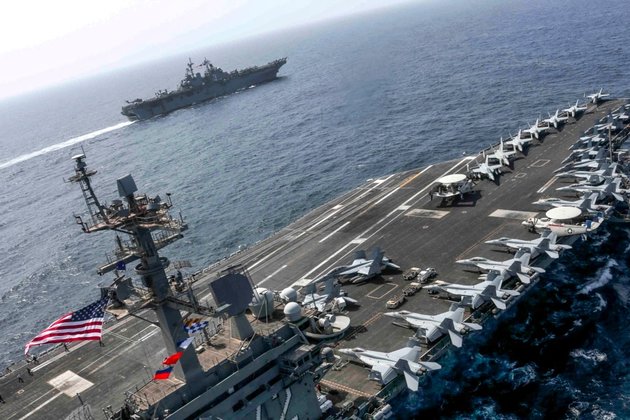 Washington - The United States has warned of 'a swift and forceful response' if North Korea conducts a nuclear test. Such a reaction, experts say, must include bolstering South Korean defenses while targeting Chinese and Russian entities and individuals supporting Pyongyang's weapons programs.

In Seoul on Tuesday, after meeting with South Korea's First Vice Foreign Minister Cho Hyun-dong, U.S. Deputy Secretary of State Wendy Sherman said, 'There would be a swift and forceful response' to a North Korean nuclear test.

At a meeting in Vienna on Monday, Rafael Grossi, director general of the International Atomic Energy Agency, said North Korea was gearing up for a possible nuclear test as one of the tunnel entrances had been 'reopened' at its Punggye-ri nuclear test site.

Signs of preparation for a nuclear test have been visible via satellite since March at Punggye-ri, which Pyongyang shut down in 2018 in front of foreign journalists invited to watch its dismantlement.

At a press briefing on Monday, State Department spokesperson Ned Price said the U.S. is concerned Pyongyang will conduct a nuclear test 'in the coming days.'

'It is a contingency we have planned for' with allies and partners, Price added.

Tensions have been mounting on the Korean Peninsula following Pyongyang's launch of eight short-range ballistic missiles on Sunday. It was Pyongyang's 18th round of weapons tests this year.

The U.S. and South Korean militaries responded by firing eight ballistic missiles on Monday and staging a show of force with fighter jet drills over the Yellow Sea, also known as the West Sea, on Tuesday.

A North Korean nuclear test, which would be the country's seventh since 2006 and its first since September 2017, should be met by reinforcing defenses around the Korean Peninsula, experts said.

'It is imperative that the U.S. demonstrates strategic reassurance and strategic resolve, which it has been doing during this year of North Korean missile launches,' said David Maxwell, a senior fellow at the Foundation for Defense of Democracies.

President Joe Biden and South Korean President Yoon Suk Yeol agreed at their summit on May 21 to deploy strategic U.S. assets 'in a timely and coordinated manner as necessary' as well as 'to reinforce deterrence in the face of [North Korea's] destabilizing activities,' according to a joint statement released by the White House. Strategic assets include aircraft carriers and nuclear-powered submarines.

The two leaders also agreed to start discussions to expand joint military drills around the Korean Peninsula. Chinese and Russian bombers and fighter jets entered the Korea air defense identification zone in the Sea of Japan, approaching but coming short of violating South Korea's airspace, when Biden was in Tokyo after visiting Seoul on his Asian tour. China and Russia have also increased their military activities around Japan recently as well.

Lawrence Korb, a senior fellow at the Center for American Progress think tank and a former U.S. assistant secretary of defense, said Washington and Seoul should 'hold more military exercises and put a carrier task force and a ballistic missile submarine in the area to send a signal' to North Korea that any use of nuclear weapons will come with a price.

South Korea's military said on Saturday it had launched military drills with the U.S. in the waters off Okinawa, Japan, and that for the first time in more than four years, the exercises involved a U.S. aircraft carrier - in this case, the nuclear-powered USS Ronald Reagan, according to Reuters.

Under Yoon's predecessor Moon Jae-in, who promoted inter-Korean reconciliation efforts, large-scale joint drills, that Pyongyang sees as invasion exercises, were either scaled down or canceled.

Victor Cha, a senior vice president and Korea chair at the Center for Strategic and International Studies who led negotiations with North Korea under the George W. Bush administration, said that 'trilateral exercises' including Japan 'would also be useful to deter unilateral actions by China, Russia, or the DPRK' since 'the Korean and Japanese security theaters are interlinked.' Cha used the acronym for North Korea's official name, the Democratic People's Republic of Korea.

'If Russia and China are making air and sea incursions into South Korea or into Japan, that should be of concern to both countries,' Cha said.

Experts also said the U.S. should respond to any Pyongyang nuclear test by imposing unilateral sanctions on entities and individuals operating in China and Russia in support of North Korea's weapons programs.

He continued, 'Many of them are in Russia and China, and most of them are controlled by entities that are already designated by the U.N. They must be blocked' from access to the international financial system.

China and Russia, as U.N. Security Council permanent members with veto powers, blocked a new U.S.-led resolution calling for more sanctions on North Korea at the United Nations on May 26.

U.S. Ambassador to the U.N. Linda Thomas-Greenfield said at a May 31 press briefing that the U.S. would 'push for additional sanctions' if North Korea conducts a nuclear test.

Beijing and Moscow, however, are unlikely to pass another resolution on North Korea, experts say, even if the regime conducts a nuclear test, unlike in 2016 and 2017 when they voted in favor of U.N. resolutions in response to Pyongyang's fourth, fifth and sixth nuclear tests.

U.S. Special Representative for North Korea Sung Kim said on Tuesday via teleconference from Jakarta, Indonesia, that the U.S. was preparing for a U.N. General Assembly meeting on Wednesday where Beijing and Moscow will 'have an opportunity to explain why they vetoed the resolution' on North Korea.

If the Security Council remains stymied on North Korea, said Anthony Ruggiero, a senior fellow at the Foundation for Defense of Democracies, 'U.S. sanctions can be used to implement U.N. sanctions' by targeting North Korean, Chinese and Russian companies, individuals and banks that aid Pyongyang's sanctions evasion.

At the briefing on Monday, Price said the U.S. and 'our partners and allies have authorities that we can coordinate just as we work on defense and deterrence together with our partners in the region.' He was alluding to sanctions the U.S. could impose in coordination with other willing countries.

Doug Bandow, a senior fellow at the Cato Institute, said that other than unilateral sanctions that Washington tends to resort to as 'America's first response to North Korean provocations,' the Biden administration 'has no good options' after a nuclear test.

'Sanctions so far have not changed the North's policies and aren't likely to have any greater impact now,' he said.

Suzanne DiMaggio, a senior fellow at the Carnegie Endowment for International Peace, said, 'Now it appears we're about to enter a fraught period, and U.S. options are limited at best.'