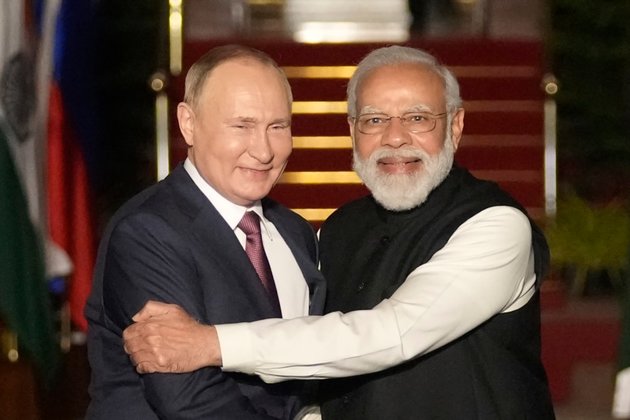 NEW DELHI - Russian President Vladimir Putin and Indian Prime Minister Narendra Modi reaffirmed their ties at a New Delhi summit that aimed to reboot a relationship that has stagnated in recent years as India moves closer to the United States and Russia to China.

The Russian leader on Monday called India "a great power, a friendly nation, and a time-tested friend," while Modi said that despite the emergence of different geopolitical equations in the last few decades, "the friendship of India and Russia has been constant."

Although the altered geopolitical landscape poses challenges in maintaining close ties, a strong defense partnership that goes back to the Cold War years is a key pillar binding the two countries. New Delhi has diversified its defense procurement in recent decades, but Russia is still India's largest arms supplier with more than two-thirds of its military equipment being of Russian origin.

The bilateral agreements signed included one for India to procure more than 600,000 AK-203 assault rifles from Russia and another to extend their military technology cooperation over the next decade.

Indian officials said Russia has begun deliveries of the S-400 air defense missile systems that India is buying from Moscow - their biggest military deal was clinched by New Delhi in 2018 despite the threat of sanctions from its close strategic partner, the United States. 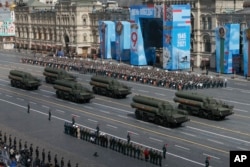 Russian Foreign Minister Sergey Lavrov told a news conference in the Indian capital that the deal was being implemented despite what he said were U.S. efforts to undermine the accord.

India has told American officials that it needed the missile defense system - one of the most sophisticated in the world -- to build its military capacities as it faces a hostile China along its northern borders. It is hoping for a presidential waiver from sanctions.

The Indian and Russian defense and foreign ministers of the two countries, who also held a strategic dialogue in the Indian capital, emphasized the importance of their relationship. With an eye on boosting trade, both sides signed 28 investment pacts in areas such as energy and shipbuilding. 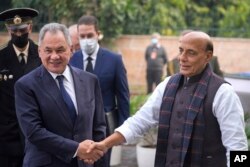 The situation in Afghanistan was also on the agenda of both countries that remain wary of the potential for terrorism from the Taliban-ruled country.

Putin said that the "fight against terrorism, drug trafficking and organized crime" were key challenges for both countries.

India also hopes its ties with Russia will help it regain some ground in the country where Pakistan and China have emerged as key players.

Key differences as the two countries build new alliances will test ties going ahead, say analysts. Russia opposes the creation of the Quadrilateral Security Dialogue, also known as the Quad, saying it is against security blocs in the Asian region. India has embraced the alliance of which it is a part and that is aimed at counterbalancing China in the Indo-Pacific region. Besides India, the Quad includes Australia, Japan and the United States.

Analysts point out that despite India's growing strategic convergence with the U.S., both New Delhi and Moscow want to give momentum to their own ties.

"The summit's key takeaway is that both nations are not willing to abandon each other," according to Harsh Pant, director of research and head of the Strategic Studies Program at the Observer Research Foundation in New Delhi.

"Their interests might be diverging, but the fact that Putin has come for his first bilateral visit to India since the pandemic, that India is buying the S-400 system despite the threat of U.S. sanctions, shows they see some value in each other as partners and want to invest in that relationship," Pant said.