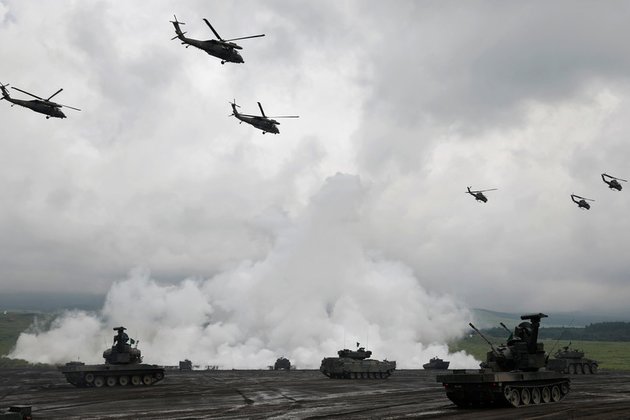 Tokyo is looking for ways to boost its defense posture, including getting the ability to strike ?enemy bases,? the country's PM has said, signaling a potential formal shift from the nation's post-WWII pacifist stance.

The hawkish remarks were delivered by Japanese Prime Minister Fumio Kishida on Monday, as he addressed parliament during the opening of an extraordinary session, convened to debate additional spending to tackle the economic impact of the Covid-19 pandemic.

"In order to safeguard the people's lives and livelihood, we'll examine all the options including capability to attack enemy bases ... and strengthen our defense posture fundamentally with a sense of speed," Kishida said.

The PM produced a similar statement last week, when he attended a review of a Self-Defense Forces (SDF) base and even rode a tank during the event. Getting the attack capability to target "enemy bases" may be needed since Tokyo "cannot overlook [North Korea's] recent development and improvement of new technologies such as hypersonic glide weapons and missiles with irregular orbits," the official said back then.

China's "unilateral attempts to change the status quo" as well as its military buildup made "without sufficient transparency" are concerning Tokyo as well, he added.

Obtaining an overseas strike capability has been debated in Japan for years, but it is likely to contradict the country's standing constitution, which was designed after the defeat of militarist Japan during WWII.

Article 9 of the constitution stipulates that "the Japanese people forever renounce war as a sovereign right of the nation," as well as refuse to use force or threat in the international field.

In line with this pacifist stance, the country is allowed to only maintain a self-defense force of limited capabilities, used for homeland defense. In reality, however, the Japanese Self-Defense Forces have already grown into a full-fledged military, with all the main branches, packed with modern hardware, present. The country has nearly 250,000 active-duty soldiers, as well as a vast fleet of combat aircraft and naval vessels.