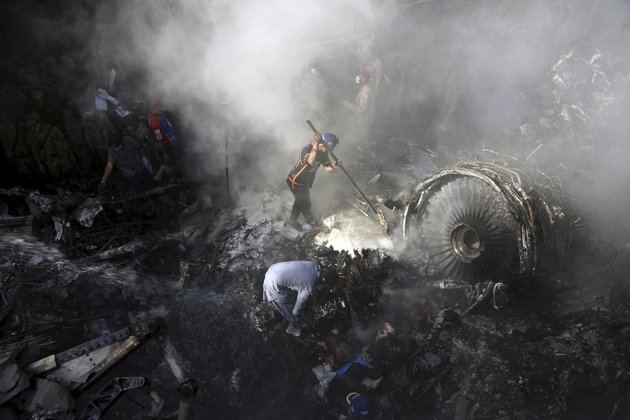 The passenger plane crashed in a residential area minutes before its scheduled landing Friday afternoon in Pakistan's largest city, destroying multiple buildings on both sides of a narrow street.

Rescue efforts were made difficult by huge plumes of dust, smoke and heat from the crash on an already hot afternoon, along with narrow neighborhood streets.

The Airbus A320 from the national carrier Pakistan International Airlines was flying from Lahore to Karachi when it crashed in an area called Model Colony.

Witnesses said the plane seemed to try to land two or three times before it went down in the poor and heavily congested area.

Video on social media appeared to show the plane with flames shooting from one of its engines.

Pakistani Prime Minister Imran Khan tweeted he was "Shocked & saddened by the PIA crash. ... Immediate inquiry will be instituted. Prayers & condolences go to families of the deceased."

The plane had a capacity of about 160 passengers, but due to social distancing guidelines, the onboard numbers were kept lower.

Pakistan has a mixed civilian and military aviation safety record. A number of plane and helicopter accidents have occurred over the years, including the 2016 crash of a Pakistan International Airlines plane that killed 40 people. The deadliest accident happened in 2010, when an Airbus A321 operated by Airblue, a private carrier, crashed and killed all 152 people on board.

Friday's crash occurred as many Pakistanis were returning to their homes to celebrate the end of Ramadan and beginning of the Eid al-Fitr festivities that break their fast.